All concerts start at 8:00pm

Internationally renowned for their dynamism, innovation and breathtaking virtuosity the Eden Stell Guitar Duo have “breathed new life into the world of the classical guitar.” (Rotterdam Dagblad).
Widely regarded as one of the world’s leading guitar ensembles, the duo’s chameleon-like ability to communicate in a multitude of musical styles makes them a constantly evolving entity with a unique creative voice.
Likened to a “miraculous single guitarist blessed with an impossibly wonderful technique and an exceptionally delicate touch” (The Observer), the Eden Stell Guitar Duo have been invited to perform at venues and music festivals around the world; including Germany, France, Netherlands, Belgium, Austria, Sweden, Spain, Portugal, Italy, Romania, Turkey, USA, Canada, Mexico, South and Central America and Australia, plus numerous radio and TV appearances on ITV, BBC and European and North American networks.
Mark Eden and Christopher Stell graduated from the Royal Academy of Music as recipients of the Principal’s Prize and the Julian Bream Prize, and continued their studies in Brussels with the Brazilian guitar duo Sérgio and Odair Assad.
Soon after, the Duo were selected to perform for the Park Lane Group’s Young Artists’ Concert Series and won the South East Musicians’ Platform competition, giving them debut concerts at London’s Wigmore Hall and Southbank Centre where they have since become regular artists, performing at both venues for music organisations such as “Live Music Now!,” the Kirckman Concert Society, Classical Guitar Magazine, and the International Guitar Foundation.
Mark’s and Chris’ concerto engagements have included performances with the Prague Chamber Orchestra and International Philharmonic at some of Europe’s largest venues including the Beethovenhalle and Stuttgart Liederhalle, with recent international recitals for prestigious events such as Guitar Foundation of America (2009), Omni Foundation Concert Series in San Francisco (2010), Wigmore Hall London (2009), London Guitar Festival at Kings Place (2008-9), The Sage Gateshead (2008-9), Alla Grande Festival in Canada (2009) and Uppsala Kongress Hall Sweden (2010), and making there debut in the Changsha festival in China 2017.
The duo were the first guitarists since Julian Bream to be Editor’s Choice in Gramophone magazine with their ‘land mark recording’ of works by Stephen Dodgson. They have recorded 7 CDs to date on BSG, Hannsler Classics, and Docker labels, and are dedicatees of new works by internationally acclaimed composers Stephen Dodgson, Adam Gorb, Dusan Bogdanovic, Gary Ryan, and Johannes Möller.
Mark and Chris are founding members of the VIDA Guitar Quartet, which has rapidly become one of the most celebrated guitar ensembles in the last few years with concerts in Europe and USA and rave reviews for their three CDs. They are also artistic directors of the Winchester Guitar Festival and founders of the hugely popular World Youth Guitar Festival, the only classical guitar festival in the world dedicated to young players with over 200 students attending from over 15 countries as far a field as USA and Australia.
Mark and Chris were elected Associates of the Royal Academy of Music in recognition of their outstanding musical achievements and they both currently hold teaching positions at the Royal College of Music, Birmingham Conservatoire, and the Guildhall School of Music and Drama. The duo are D’Addario Strings endorsed artists.

“The Eden Stell Duo played to the max!” New York Times
“In every respect the performances and recording are of the highest quality. The Eden-Stell Duo are one of the best dubs around. This is a landmark recording on the guitar’s map.” Gramophone

“… utterly entertaining and absorbing but with a refinement that could also melt your heart.” Classical Guitar Magazine

“Mark Eden and Christopher Stell have breathed new life into the world of the classical guitar … they do what a whole generation of guitarists haven’t – they communicate the music first and foremost … Here is the future of the guitar music.” Rotterdam Dagblad, Netherlands

“Their performance exuded such natural vitality and joy in their skills and rapport that I was hanging on almost every note … a riveting experience.” The Independent, London 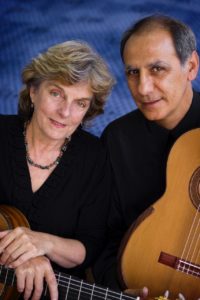